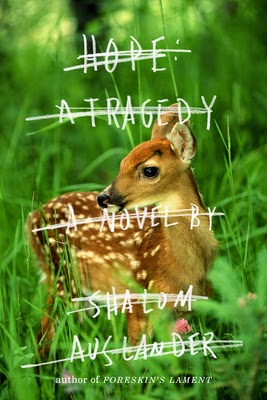 The idea that hope is the hugest misfortune humanity was cursed with is not at all new. It is sadly revealed in the myth of Pandora’s box, it is thoroughly proved by the Buddhist equivalence between life and suffering, it is only apparently reversed by the Dantesque inscription on the hell gates “Lasciate ogni speranza…”

New in this disturbing book is the way the author chooses to interpret the theme. To prove, without doubt, that hope is a tragedy in a book that reads as a comedy is a masterstroke. The main tool, although not the only one, is the double entendre, that starts with the very title: is “tragedy” a synonym for hope, or simply a subtitle of the book (instead of the usual specification “a novel”) or is it a little of both?

The answer to this question is not as simple as it seems, because it may lead to different interpretations in interesting contrast with the light, comic tone, from the idea that the laughter is meant to be only another form of crying, to the opposite one, that happiness is as meaningless as suffering. In which case the only reality, the only way to escape is death. I remember Cioran, in his essay, The Trouble with Being Born that develops the same theme, although in another register. The most striking similarity of the two books concerns procreation – only that whereas the Romanian author congratulates himself for resisting the atavistic impulse of being a father, Solomon Kugel, in his own bizarre way of thinking, feels guilty he didn’t try and make an imbecile of his son:

A truly good father, a caring father, a protective father, would sit that child in front of the television set all day and let that sharp, curious mind turn to spongy, uncomprehending, witless mush. It would have been the least I could do. I brought him into this world, didn’t I? I should at least have the courtesy to ensure he go through it in a mindless, drooling stupor like the rest of the goddamned species.

The main character’s name Solomon Kugel, is a precious clue for this key of lecture. The association of his first name with biblical resonances suggesting wisdom with the second, Kugel, which apparently means a bland, puddingy Jewish potato dish, is comical enough. But what else is man that the caricature of some otiose God who, bored of this resemblance of His creation with Himself often tricks man into loving life and forgetting the only reality is death? Since Kugel somehow had become aware of his puppet condition, he became obsessed not with death, but paradoxically, with his own attitude towards death in the very moment of dying. He keeps remembering the last not-so-memorable words of some memorable artists, and he keeps writing epitaphs for his tombstone. No wonder that book begins with the hero fear of dying by fire and it ends, for there is no flying from fate with him dying by fire. In between, he gradually acknowledges the Kafkian character of the world, inhabited by unfortunate monsters that the others keep alive because of a wrong sense of pity and of course hope:

Exactly how long were the poor Samsas obligated to keep that arthropodan pain in the ass in their home? A year? Two? Ten? Sixty? Were they supposed to find him a giant bug wife, and let them have giant bug children before they could finally, without judgment, move on with their already miserable lives? (…)


Gregor’s sister could have saved the whole family—not the least of whom was Gregor himself—a world of anguish and trouble if she’d just gone into his room, day one, with a giant can of Raid and gotten it over with.

His attitude is fuelled by a whole Jewish history of suffering whose symbol is Anne Frank. Anne Frank who rose from the dead and hid in his attic, forcing his epiphany. One of the most poignant pages in the novel shows our (anti?)hero wandering between the supermarket ranges to buy some food for her, while noticing that nowadays you pay more for the things you don’t get in food (“no sodium, no fructose, no corn syrup, no MSG, fat-free, carb-free, dye-free, wheatless, flourless, sugarless”) and dreaming of the departure of his unwanted guest in alimentary clichés:

… one morning he would awaken and go up to the attic, and Anne Frank would be gone, and he could go on with his life, Anne-free.

Kugel is a strange mixture of hero and antihero, a modern Don Quixote who chose to mock instead of honouring sacred images: “I’m sick of this Holocaust shit” This amazing ability to scorn taboo subjects has not the purpose of making you laugh – this is only a secondary effect, that sometimes successfully hides the grave tone of the message – the absurdity and futility of a life in a world where everything concerts to make you suffer: your body, your psychic and of course, your neighbour, the man. The world keeps going only because it is wrongly decoded: hope, optimism, life itself are valueless. Therefore Kugel prepares himself for his own tragic-less end by consciously making absurd choices. First he gives up society, by losing his job while trying to get rid of Anne. Then he gives up family, by refusing to evacuate the same Anne, who scared his boy and his wife. And finally he gives up life (both metaphorically and literally), by choosing to rescue Anne and not his mother from the fire.

There is an epilogue to emphasize even more the title. A young couple, on the verge of buying the house of their dreams notice, like the Kugels did once, that it smells funny. Of course it does – their own Anne Frank is waiting for them in the attic. For:


It doesn’t have to, Professor Jove had replied.