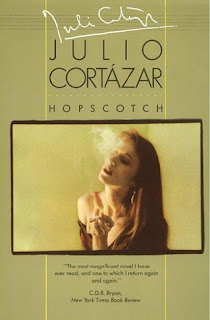 A few nights ago I dreamt one of those bizarre dreams in which I was literally jumping from one page to another depending on the falling of the pebble-pen I kept throwing on a giant book opened at my feet. I often dream I’m reading or, if it happens to be a nightmare, trying very hard to make sense of an illegible page, but this time I paid no attention to the words I was seeing, so focused I was on the game itself.

When I woke up, I realized on one hand that I subconsciously associated a short story I read a long time ago about two characters literally living in a bookland with Julio Cortazar’s Hopscotch, and on the other hand that for the first time ever I didn’t consider looking at the narrative technique as “work” and following the story as “play”; moreover, I was having such a wonderful time playing by the rules enunciated by the author that I didn’t care much for the story, so that I could happily contradict one of the characters’ belief that:

From the very beginning, Hopscotch challenges the reader by offering two choices of reading. If you are interested more in the content than in the form, the author says, you’d better follow the conventional path, with a linear story firmly (and comfortably) anchored in time, space and other narrative constraints (in which case you will have to ignore a good half of the book); if, on the contrary, you are interested more in form than in content, you are offered a fragmented path to follow, which implies hopscotching for example from a chapter on page 10 to a chapter on page 365 (in which case you will have to ignore only chapter 55 – part of which is reproduced in chapter 133 anyway). This is the only way of:

…making an accomplice of the reader, a travelling companion. Simultaneanize him, providing that the reading will abolish reader’s time and substitute author’s time. Thus the reader would be able to become a coparticipant and cosufferer of the experience through which the novelist is passing, at the same moment and in the same form.

If the reader dares to follow the second path, he is sure to find, in chapters that try new and glorious forms of writing, many hidden treasures that not only will change his prejudices of what literature is supposed to be but also will beware him of the danger of too much involvement with the story. Accordingly:

· Chapter 34 is a concrete illustration of the celebrated saying that a good reading is a reading between the lines, by alternating, line by line, a story with the thoughts of its reader not only about the story itself but also about the reasons of another reader in reading it:

In September of 1880, a few months after the demise of my
And the things she reads, a clumsy novel, in a cheap edition
father, I decided to give up my business activities, transferring
besides, but you wonder how she can get interested in things
them to another house in Jerez whose standing was as solvent
like this (…)
as that of my own…

· Chapter 68 is written in an unknown, but strangely familiar language, a conlang that mimics communication whilst denying it:

· Chapter 69 is translated from Ispamerikan, a sort of phonetic transcription that ironizes spelling rules or maybe mocks pronunciation:

· Chapter 96 has at a given moment the appearance of a dramatic text, with the characters names on the left column and their replies on the right, but the replies follow one another independent of the names so the reader is left with the task of assigning them.

· Finally, Chapter 131 is the end that ends somewhere in the middle of the book by a chapter that was already read and which had sent you to another chapter in order to suggest the neverending of the fiction (or maybe to test once again your attention)

The hopscotch (what a beautiful word has Spanish for this, rayuela) becomes thus a mighty technique that fragments the narrative to draw attention to the ludic of the creation instead of the developing of the story that has “hypnotized” (Cortazar’s term) many a reader from the beginning of the literature.

Characters’ conversations, places and events are interrupted by quotes, short biographies, precisions that couldn’t find their place in the conventional story – which is not really disturbed anyway (the non expendable chapters are always read one after the other, intercalated or not with the expendable ones). The idea is to turn around the show for the beauty of it, to approach the world of fiction from a new direction:

He knew that he was a spectator on the edge of the spectacle, like being blindfolded in a theatre: sometimes the secondary meaning of some word would come to him, or of some piece of music, filling him with anxiety because he was capable of sensing that it was the primary meaning.

It seems there aren’t many books written in this strange genre called hypertext fiction (Tim Martin in his review enumerates some of the few other books that compose it) but the experience is truly amazing, divorcing the reader of the prejudice that literature (especially prose) is story instead of words as surely as the abstract art has taught the viewer that painting exists without explicit visual reference in the world. Instead of this prejudice the reader is invited to embark on another adventure, which is building the text together with its author, in maybe the most beautiful metaphor of all – the wall of words that is never impenetrable, if you know where to look:

The page contains a single sentence: “Underneath it all he knew that one cannot go beyond because there isn’t any.” The sentence is repeated over and over for the whole length of the page, giving the impression of a wall, of an impediment. There are no periods or commas or margins. A wall, in fact, of words that illustrate the meaning of the sentence, the collision with a wall behind which there is nothing. But towards the bottom and on the right, in one of the sentences the word any is missing. A sensitive eye can discover the hole among the bricks, the light that shows through.