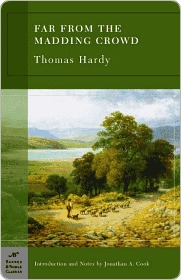 I still remember the Romanian edition of Far from the Madding Crowd in my mother’s library I was sometimes looking at in my teenage years only to put it away again, even after I read and enjoyed other Thomas Hardy’s writings (I had been pretty impressed with Tess d’Urberville if I recall correctly). Why I have avoided this classic despite its beautiful title at a time when I was reading almost whatever came to hand, I don’t know. Even now, had I not accidentally seen the end of the movie version (the Julie Christie one, who makes a very credible Bathsheba), I would have continued to ignore it, and what a pity it would have been.

A pity because this Hardy’s fourth novel is quite charming, with its Victorian themes and motives, like marriage, education, the role of the woman and the moral constraints in the middle-class society, reinterpreted in a new way, not only by emphasizing the role of the chance in the destiny of the individual, but also by studying how the same destiny changes whenever the equilibrium between reason and emotion is broken. From this point of view, the novel reminded me the four kinds of love identified by Stendhal in his essay On Love (which I don’t think the writer was familiar with, at least not at the moment of the book’s creation): passionate, mannered, physical and vanity-love.

Read more »
Posted by Once upon a Reading at 9:06 AM 2 comments: Links to this post 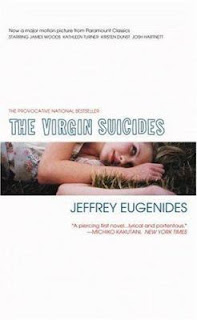 What horizon of expectation does a clever title like The Virgin Suicides open (this in the improbable case you’ve never heard of the famous song of the equally famous band Cruel Crux J)? One could focus on the “suicide” word and think of Camus and his philosophical dilemma (whether life is worth living). Or one could be distracted by the “virgin” word, read with the image of pagan sacrifices in mind (on the altar of civilisation, of course). Or one could simply take “virgin” as the adjective it is, fully and unexpectedly (and without teenage connotation whatsoever) qualifying “suicide” , in which case the book is expected to reveal new, unthought-of meanings of the latter, that will divorce it either from “bravery” or “cowardice”, the usually accompanying words.

It is difficult not to suspect such intent, given that although the novel speaks of virgins (that is adolescents) that kill themselves, it is not about them, it is not about the Lisbon girls. Not really. It is more about our rooted habit to forget and replace the forgotten things with false memories. It is about the subtle but firm bans we let society to use in order to keep us on a short leash. It is about our deep fears masquerading as vulgar revelations and apparent misunderstandings that lead to no epiphanies. In the end, it is about suicide – by dull solitude and perfect indifference.

Read more »
Posted by Once upon a Reading at 9:07 AM No comments: Links to this post

Professor X, "In the Basement of the Ivory Tower" 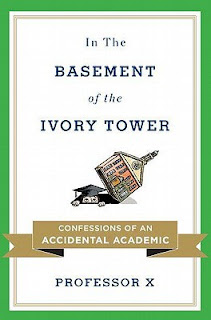 The Elitism of Learning

When I left Romania, about eleven years ago, I decided to give up on teaching as well. After sixteen years of doing only this, it was not an easy decision to make, but I was so fed up with the corrupt system I was leaving behind that I had lost all faith in the generosity of my profession.

Of course, once a teacher always a teacher and although I’ve generally stuck to my decision and now I’m working full time in an office (finding my work interesting and challenging enough even after a decade or so) I couldn’t sever all the ties, so not only I have been teaching part time in various private language schools, but I’ve also shared my knowledge with my friends and my friends’ children whenever they needed to improve their French, English or even Italian skills. And, as a funny parenthesis, even today I say sometimes that I’m going to school instead of the office and now and then I dream I’m in front of a class again. Moreover, I asked for and obtained my teaching permit six years ago (I don’t know whether as a sort of back-up or simply because I am still a teacher at heart) and in order to renew it I followed five courses (3 credits each) last year, which made me better acquainted with the educational system here in Québec – and this is where I wanted to get, really, in order to discuss Professor X’s book, In the Basement of the Ivory Tower.

Read more »
Posted by Once upon a Reading at 9:05 AM No comments: Links to this post 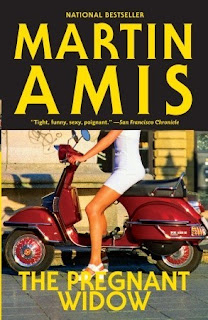 Martin Amis’s The Pregnant Widow is the first book I’ve finished in 2016 (I wanted to write “this year” then I remembered that once I had started a review with “this summer” and later, while re-reading it I had to investigate to learn what summer I was talking about J ) and what a good beginning it was indeed!

Maybe this is not Martin Amis at his best, but it was fun, despite the somehow gloomy title, inspired by Alexander Herzen’s dooming prophecy used as the first motto of the novel:

“The death of the contemporary form of social order ought to gladden rather than trouble the soul. Yet what is frightening is that the departing world leaves behind it, not a heir, but a pregnant widow. Between the death of the one and the birth of the other much water will flow by, a long night of chaos and desolation will pass.”

Read more »
Posted by Once upon a Reading at 10:24 AM No comments: Links to this post 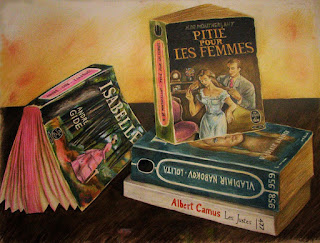 Read more »
Posted by Once upon a Reading at 2:15 PM 16 comments: Links to this post