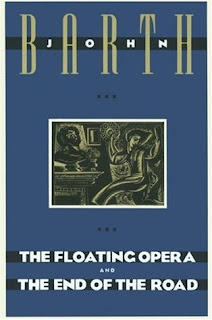 I was eighteen, I think, when I first read Camus’s Myth of Sisyphus and I remember even now the long debate I had with my friends around the allegation (that I loosely translate as follows) “To commit suicide is to acknowledge that life is not worth living.” Well, it was weird in a nostalgic way to hear some of our arguments (especially the question whether there is really a meaning of life) rephrased by Todd Andrews, the main character of John Barth’s Floating Opera. Although not-so-weird considering that the author was only 24 when he wrote his novel, so he was not likely to have already been cured of that same enthusiastic nihilism and same fascination with the dark side of the existentialism me and my friends (together with many a enough-read young adult) were suffering from.

The Floating Opera recalls the most important day in the life of Todd Andrews, as he remembers it more than a decade later – the day he decided to commit suicide but lived to tell the story (and no, this is not a spoiler, the reader realizes pretty early in the story that the narrator is not a voice beyond the grave 😄). The tale is built not only to prove the rightness of this decision but also to un-prove it, in order to stress the lack of importance of either. The way of a cynical existentialist and/ or a nihilist? Fragments of Todd’s past and present float to and fro before our eyes to enforce the narrator’s belief that life is nothing but a stupid, senseless joke, a grotesque maze with no minotaur but no exit nonetheless. All his life, he realizes, he felt strongly only five emotions, each one the result of inglorious, often comically pathetical events: he learnt mirth by discovering the ridiculous posture the mirror was showing him during his first sexual experience (thus involuntarily humiliating his partner); he learnt fear in the war (thus cowardly killing a man whom he thought for a while his soul had lain with); he learnt frustration at the suicide of his father (whose body he had to unhang); he learnt surprise when the wife of his friend offered herself to him (and who became his mistress with the blessing of her husband); and he learned despair when he had the epiphany of all the truth contained in Camus’s phrase (the night before his planned suicide).

The voice telling us all this alternates sarcasm with “negative philosophy” as rightly observes Orville Prescott, in his New York Times' cutting review, although he considers this oscillation a flaw, and he reproaches the author of having artificially reunited two books – a farce (in which “faults outweigh humor”) and a meditation (in which “the philosophical  disquisition” is reasonable and intelligent), so different that they seem even written by two different authors.

However, I beg to differ. The Floating Opera may have some faults (minor, in fact, and due mainly to the enthusiasm of a young novelist who is sometimes showing) but the lack of structural unity is not one of them. On the contrary, the coherence of the narrative is one of the things I liked most. But it is also true that I have perceived his “opera” neither as a farce nor a philosophy, but mainly as a metatextual novel masquerading as a realistic one, for its main theme, as the title subtly reveals, concerns the complicated relationship between the creator and his art. In fact, all the meanings of the title, explicit and implicit, point out to this very theme.

Even before the book starts, that is in his Foreword to Doubleday Anchor Edition, the author discloses that the title was inspired by a picture of Captain James Adams’s Original Floating Theater he found while poring over the photographer A. Aubrey Bodine’s albums of Marylandia, and which gave him the idea to write an allegory in the form of a minstrel show. The narrator, who writes a novel too, with the same name, supports this explanation by stating that the title of his novel is inspired by the name of a showboat he saw in 1937 travelling in Virginia and Maryland area: Adam’s Original & Unparalleled Floating Opera. To this explanation he offers a second one that deepens the signification: he reveals that his dream was to build a forever drifting showboat with a single open deck where shows be played continually for an audience on the shore who would see only that part of the show the tide would bring in when the boat floated past. A strong metaphor for his narrative:

…that’s how this book will work, I’m sure. It’s a floating opera, friend, fraught with curiosities, melodrama, spectacle, instruction, and entertainment, but it floats willy-nilly on the tide of my vagrant prose: you’ll catch sight of it, lose it, spy it again; and it may require the best efforts of your attention and imagination – together with some patience, if you’re an average fellow – to keep track of the plot as it sails in and out of view.

May I remind that the showboat is also the hosting place for the aborted climax of the rising action? It is the place that gathers for the last time the characters of the story, ready to be blown up either by their friend, the 37-year-old Todd who had discovered that “there’s no final reason for living”, or by their creator, the 50-year-old Todd who had discovered the same about the death and who let them escape this fate just of this equally ultimate truth, that “there is no more justification for suicide than for going on living”.

And it is always the showboat image that unfolds the final meaning of this so clever novel, a third way to escape the existentialist dilemma: to give an infinite dimension to this lack of reason of living by transforming it in the never-ending tale of the creation – a floating opera above and beyond mere life, above and beyond that ephemerality of the human condition that bothered Todd for so long:

I would take a good long careful time, then, to tell Dad the story of The Floating Opera. Perhaps I would expire before ending it; perhaps the task was endless, like its fellows. No matter. Even if I died before ending my cigar, I had all the time there was.