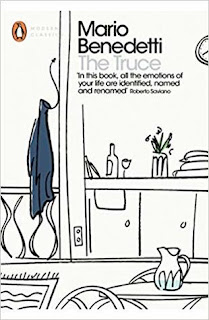 The Truce is the only (I think) Uruguayan book I have ever read, but what an introduction to the Uruguayan literature I’ve been offered! Moreover, I have learned (via Wikipedia , of course) that its author, Mario Benedetti, was a prominent member of the influential Generación del 45 and that he is considered one of the most important Latin American writers. A skilled translator (the first to translate Kafka), a mighty journalist, a brilliant novelist and poet, winner of a lot of international awards, he was nevertheless haunted by the same feeling of the worthlessness felt by many of his generation, as his last poem, dictated to his personal secretary just before dying, reveals:

My art has consisted

In this not being noticed too much

I've been as a levitator in my old age

The brown sheen of the tiles

Never came off my skin

It is the same sad, resigned voice we will hear in The Truce (La Tregua), a novel written in the form of the diary by Martín Santomé. The narrator, approaching his fifties, is a widower of many years with three adult children, whose only excitement in life seems to be his approaching retirement until he falls unexpectedly in love with a woman 26 years younger. This sensible, decent, and quite ordinary man finds himself in a midlife crisis while trying to make sense of his relationships with family, love and God, every one of them calling for a truce: with his prejudices, age and spirituality. A foreboding scene of the struggles to come appears in the first pages, where he describes his accidental encounter with an unusual drunk, “with a special light in his eyes”, who asks a question that would haunt him for hours afterwards: ‘Do you know what’s wrong with you? You’re going nowhere.’

The crisis in the family is triggered by the discovery that his son Jaime, his favourite of the three, is a homosexual. On the one hand he feels guilty, reckoning that this is a consequence of him not having been able to replace their mother, and on the other hand he thinks that “when a person is rotten, there is no education that will cure him, or any amount of attention that will straighten him out.” The accusing and ashamed voice is charged with all the prejudices, stereotypes and rejection of his generation:

My son is a queer. A queer. Like the repulsive Santini, whose sister is a stripper. I would have preferred that he turn out to be a thief, a morphine addict or an imbecile. I would like to feel pity for him, but I can’t. I know there are rational and even reasonable explanations. I know that many of those explanations would charge me with part of the blame. But why did Esteban and Blanca grow up to be normal? Why did Jaime deviate while they didn’t? And it just so happens that it’s Jaime, the one I loved the most. No pity. Not now, not ever.

The sentimental crisis is generated by the age difference between him and Avellaneda, that makes him worry about a future in which he would become a burden, or simply  too old to be loved anymore, even though he knows she is not superficial and she is not cruel. The last image of her bittersweetly coincides with the acknowledgment that the bonds between them are stronger than he imagined:

She took a few steps, turned around and happily waved at me. Deep down, none of that is very important. But there was a familiarity, a simplicity, in her gesture. And at that moment I felt comfortable because I was certain there was communication between us, helpless perhaps, but peacefully assured.

The spiritual crisis is an ongoing one, because he had always wanted a personal relationship with God and had always felt He was beyond his reach; in other words, he had always wanted to believe but could not, despite his religious education. However, in the worst moments of his life, when his own daughter calls God a brutal sadist, he feels for a moment that He could have helped him, if only by explaining why, but the moment was lost and he is back at the same indecisive relationship with Him:

Perhaps I had almost moved Him. I also had the feeling that a decisive argument existed, an argument that was right next to me, in front of me, and that despite this, I still couldn’t recognize it or add it to my plea. Then, after that time limit He had granted me to convince Him had elapsed, after that hint of vacillation and timidity had come to an end, God finally regained His powers. God went back to being the almighty Negation He had always been. Still, I can’t feel rancour towards Him, I can’t paw at Him with my hatred. I know he gave me the opportunity and I didn’t know how to take advantage of it. Perhaps someday I’ll be able to understand that unique and decisive argument, but by then I’ll already be terribly withered, and at present I’m even more withered. Sometimes I think that if God played fair, He also would have given me the argument I could use against Him. But no, it can’t be. I don’t want a God who doesn’t choose to trust me with the key with which to return, sooner or later, to my conscience to support me; I don’t want a God who offers me everything ready-made, like one of those prosperous fathers from the Rambla, filthy rich, was able to do with his snobby, useless little son. No, definitely not that. Now my relationship with God has grown cold.

Finally, is there a truce between Martín Santomé and life or truce is an euphemism for resignation? For the last words of the diary seem more like an acceptance of the fact that one can escape the ``brown sheen of the tiles`` of the skin only by giving up time and returning them to the ground:

No more office. Starting tomorrow and to the day I die, time will be at my disposal. After so much waiting, this is leisure. What will I do with it?

Posted by Once upon a Reading at 1:36 PM