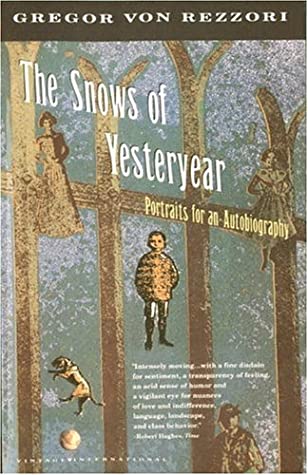 The Snows of Yesteryear is one of the best memoirs I have ever read. Not only the characters portrayed are fascinating (the telluric Cassandra, the neurotic Mother, the burlesque Father, the fairylike Sister and the down-to-earth Bunchy) but also, but especially the reconstruction of a lost era and of a lost land are truly magical: an era of bygone sunny even-when-cloudy days lived in a town that, belonging first to an Austrian defunct empire, then to a Romanian ephemeral kingdom and finally to a dystopic Soviet Ukraina, changed its name accordingly “from Czernowitz to Cernăuţi to the present Chernovtsy”. The narrative voice tries and brilliantly succeeds to recapture the spirit of that era in which

We did not live our own lives. Our lives were being lived by our period.

It is no wonder therefore that these two other characters be added to the gallery: the Past and the Town. The Past that sometimes melancholically sometimes ironically, carries the mixed feelings of minorities dreaming of the golden age of the Austrian Empire while inhabiting a region which should have remained their own too, but for the cruel, sarcastic turn of history:

Greater Romania, the product of the 1919 Treaty of Trianon, was at the peak of its vainglory and did not like to acknowledge that, together with its minorities, it had been bequeathed their cultural heritage. My father never let an opportunity pass to proclaim this loudly, and on one of these occasions he had precipitated a nasty dispute with Professor Jorga, pope of all Romanian historians, an effrontery equivalent to lèse majesté and defilement of the national flag.

The Past that uncovers once again that almost unanimous attitude of hate or indifference for the fate of the Jews in the period between the two world wars, actually the same attitude the reader had found in The Memoirs of an Anti-Semite:

As to the anti-Semitism of the upward-striving Third Reich, it was the generally accepted wisdom among non-Jews in the Bukovina at that time that, irrespective of all tolerance and even close personal relations with Jews, it could be only salutary if a damper were placed on the “overbearing arrogance of Jewry.” (…)

In a nutshell: The ascent of Nazi Germany, with its thunderous marching columns and wheat-blond maidens, concerned us infinitely less than the abdication of the recently crowned King of England in order to marry Mrs. Simpson.

As for the Town, it was simply the sacred space, the axis mundi where the past and the present happily and picturesquely coexisted, where only faces and costumes changed:

In the days between 1919 and 1940, the Kingdom of Romania governed the Bukovina with a sovereign self-assurance based on the claim that it had been the Romanians’ archoriginal home soil, their Ur-land since the time of the Dacians — a claim that may be questioned. In Czernowitz-Cernăuţi, one did not go to the trouble to doubt it. In fact, that Romanian interlude was hardly more than a fresh costume change in a setting worthy of operetta. The uniforms of Austrian lancers were supplanted by those of Romanian Roşiori, infantry wasn’t worth noticing much anyway, and the whole transformation was given no greater weight than the one accorded the changing scenery at the municipal theater between Countess Maritza and The Gipsy Baron or The Beggar Student.

However, returning to it after 50 years or so, and looking in vain for the house of his childhood, to find only his mother’s house surrounded by ugly new buildings, the narrator had the epiphany of the “mythical topos” his Czernowitz had become: a place invented by his memories and populated by his ghosts, a land much more beautiful than the real one:

No longer could I ever think of that house of my mother’s without its being superseded by the present ugly reality. The real house of my childhood had been spared this fate but instead had turned into irreality, haunted by a mythic quality that made me fear that I could never again believe in my own reality. So be it! It was indeed in the realm of the unbelievable and fabulous that my own Czernopol, the imagined counterpart of the factual Czernowitz, was located. The reality I had found in Chernovtsy threatened to destroy even this. I had to leave as quickly as possible. You must never undertake the search for time lost in the spirit of nostalgic tourism.

Posted by Once upon a Reading at 8:44 AM