John Gray, "Men Are from Mars, Women Are from Venus. A Practical Guide for Improving Communication and Getting What You Want in Your Relationships" 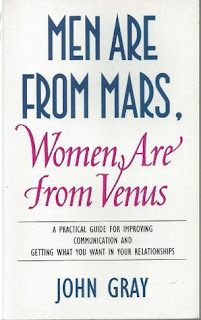 Do you remember the bunch of books Bridget Jones used to carry about in order to make sense of her weird and chaotic life? One of them was just this one, Men Are from Mars, Women Are from Venus, and because of its longish and kinda stupidish, funnyish title, I assumed, when I saw the movie, it was merely an amusing invention to go with the giddy thirtish female character (as you see I’ve just discovered magic of the “-ish” suffix in the economy of the text).

So imagine my surprise when I found the book was very real (hey, in my defence what I recall happened some eight years ago!) and very famous (according to Wikipedia it sold millions of copies). Meanwhile I’ve heard and read a lot of allusions about this book but although I bought it by mild curiosity from an antique book store several years ago, I’ve let it collect dust on my to-read shelf, for it was always another book more inciting to choose. Until now, that is.

I have to confess that, since I am not a great believer in such magic recipes, I’ve never come round reading this kind of relationship guides until now – they seemed to me a little fraudulent in their pretense that they can solve major problems of the human soul and/ or behaviour by providing some general advice similar to those that help you to make work a certain device. Consequently, my motivation for reading has been from the beginning mere curiosity and a suspicion that, with such a title, I would have fun. Which indeed I’ve had, but when all was laughed and done, I found it, unexpectedly, quite sad. What a difference between this book, with its pitiful pretence of psychological study and great books on the same subject (although not “practical guides”) like Denis de Rougemont’s Love in the Western World for example. And if you think I am unjust by comparing grapes and tomatoes so to say (for everybody takes care not to compare apples and oranges) I could tell you that this is the very core of the problem: for such a book to gain an almost religious halo, it needs readers without much psychological depth, who think they are mere machines waiting to be fixed, should the right tool be found.

My daughter has played for many years now a computer game called Sims. If you are not familiar with it, I can tell you it is about a virtual family you grow up, build a home for, send it to work and so on. She told me, amused, that once she forgot to send one of them to the toilet and although he had become increasingly uncomfortable he couldn’t go to the bathroom by himself, he had to wait (and grimace, and dance, and lose self-esteem points) until she saw him and put him on the right direction. Don’t you feel lately that our society is all composed of Sims, waiting to be told what to do, when and how? Helpless when let alone, unable to understand the others, unable to understand themselves anymore without a how-to-do at hand. In aching need of statements like “A man sense of self is defined through his ability to achieve results” or “A woman’s sense of self is defined through her feelings and the quality of her relationships” which they don’t bother even to verify, so they seem the answer to all the problems.

And the sadness of all this it is that nobody thinks it demeaning to find oneself reduced to such  stereotypes: man is action, woman is feeling, man is silence, woman is talk, man is a rubber band, woman is a wave, etc., etc., etc., on the contrary, they find strangely comforting to be offered universal solutions like Love Letter techniques (oh, yes!), scoring boards, emotional tables and even a “Venusian/ Martian phrase dictionary which teaches you how to speak your man/ woman language:

“We never go out” translated into Martian means “I feel like going out and doing something together. We always have such a fun time, and I love being with you. What do you think? Would you take me out to dinner? It has been a few days since we went out.”

I won’t bother to talk about the platitude of the above-quoted “translation”, but I cannot help expressing my dismay that millions (millions!) found it useful in improving their relationships, as though otherwise they could not understand a hyperbola or a hint or whatever. Besides, the book is full of such pearls of wisdom, many beautifully framed to easier be found in the rush of a matrimonial crisis:

When our partner resists us it is probably because we have made a mistake in our timing or approach.

Not to be needed is a slow death for a man,

Never go into a man cave or you will be burned by the dragon!

Nor will I talk about the kind of ridiculously mixed metaphors the book is full of (I’ve just given you an example); I will only jump to the final chapter with its involuntary humour, chapter that pretends that this is the one and only way to keep alive the magic of love. What magic? Love is not, to use a Stendhalian appellation, passion or vanity, it is not mannered or physical. Not anymore. Love is a tank of gas which any Venusian expects to be filled by her Martian. Correctly, I mean. Whence the utility of this book. To whom it may concern.
Posted by Once upon a Reading at 12:31 PM