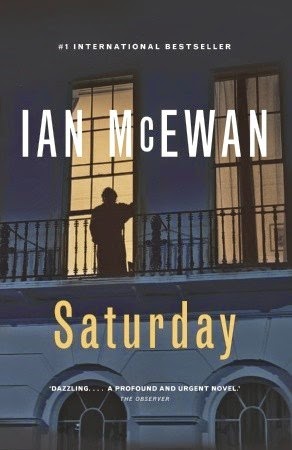 “…here as on a darkling plain”

Freud, I think, said once that the man’s main objective in life, the pursuit of happiness, is prevented by at least one of the following factors: his own body, the external world and the relationships with the others. Family, which could be his refuge and personal heaven is continuously threatened by a society that cannot permit isolation which would lead to its extinction.

This appears to be the theme of Saturday: the frailty of human happiness, permanently challenged by the roaring chaos of the world. And the key to this interpretation is offered by the quotes that open and end the novel: the first, from Saul Bellow’s Herzog, is Herzog’s image of a helpless mankind controlled by a master puppeteer that pulls infinite strings provided by science, politics, psychology and so on; the second, from Matthew Arnold’s poem Dover Beach, is the fragility of the couple who mistakes for friendship and security the aggressive indifference of the world:

Ah, love, let us be true
To one another! for the world, which seems
To lie before us like a land of dreams,
So various, so beautiful, so new,
Hath really neither joy, nor love, nor light,
Nor certitude, nor peace, nor help for pain;
And we are here as on a darkling plain
Swept with confused alarms of struggle and flight,
Where ignorant armies clash by night.

In this wearisome world wakes up Henry Perowne on a Saturday morning, at dawn, with a curious mixture of euphoria and anxiety and a subconscious fear of punishment for the happiness he was granted by appeasing the two gods that society usually uses to keep the individuals in check: Ananke and Eros, that is, his work and his love. He has the perfect family, with a wife he is, after twenty years, still deeply in love with, and two amazing children (not so children anymore), beautiful and talented. He has a rewarding job, as a brilliant neurosurgeon, and a beautiful home he sometimes feels guilty about. Looking through the window, he has, at first, the same false impression of security in a perfect world world as the couple in Arnold’s poem. London (the leitmotiv of the City as an alluring trap reminded me of Henry Miller’s Paris) unfolds in front of his eyes in full agreement with the whole universe, with streetlamps that look like stars and bird shit that looks like snowflakes:

He sees the paving stone mica glistening in the pedestrianized square, pigeon excrement hardened by distance and cold into something almost beautiful, like a scattering of snow.

This quiet harmony is suddenly disturbed by the apparition of a plane in flames, which recalls the terrors of the modern society, from grim accidents to terrorist attacks (it is less than two years after 9/11). Whether the destruction of the aircraft was fortuitous or deliberate proves to be irrelevant, since it leads to the same conclusion, that there is no haven, no safe place in the entire world as Henry will become increasingly aware as Saturday progresses and the dreamlike image of the dawn becomes more and more nightmarish, culminating with the invasion of his privacy and the murder attempt of his entire family.

Many a critic observed that this book is different from what McEwan got us used with – maybe because it allures the reader with a certain sense of normality – no eerie characters or gory details here, but is it? Yes, the tension is more subtle in here, but the idea that the mankind is entitled only to a transitory happiness grows gradually, from an almost imperceptible uneasiness to a quiet despair.

To fight this aggressive intrusion, two weapons are provided, either by the hero or his family, and both prove partially ineffective: science and art.

The reductionism, of which Henry Perowne is a firm believer, is a philosophy relying on, so to speak, scientific fatalism: from this point of view almost everything in the human behaviour can be explained by the genetic biology. The hero is convinced that his moods are dictated by some “chemical accident while he slept”, and his fidelity is less fed by the love for his wife than by his character traits which programmed him to value stability and familiarity instead of sexual adventure, given that the entire human behaviour is recorded in the genes (“it’s down to invisible folds and kinks of character, written in code, at the level of molecules”). With the help of this knowledge he avoids an assault in the morning – by rapidly diagnosing a degenerative disease at one of the aggressors, Baxter, that is partially responsible for his actions and by promising professional help. The same knowledge will serve him a second time, in a more dramatic situation, when his entire family is in danger. However, both events reveal the limitations of the powers of the reason, and the washing Henry performs after operating on the same Baxter is a cathartic gesture – a last attempt to stop the invasion and destruction of his happiness:

He takes a shower to wash away the sweat of concentration and all traces of the hospital – he imagines fine bone dust from Baxter’s skull lodged in the pores of his forehead – and soaps himself vigorously.

The other way to hold out against the insanity of the world is art. Art can also serve as explanation and shield, with its illusion of beauty and universality, of a microcosm holding the macrocosm. Art can and will remove the knife from Rosalind’s throat, prevent the rape of Daisy and even provide hope for the criminal. Nevertheless Art is not that deus ex machina that brings the climax to an improbable denouement in “a faintly preposterous episode” as Zoe Heller, in her New York Times review seems to think. Art is only a form of expression, a transitory epiphany, an ephemeral acknowledgement that victim and assassin can catch together a glimpse of beauty:

Daisy recited a poem that cast a spell on one man. Perhaps any poem would have done the trick, and thrown the switch on a sudden mood change. Still, Baxter fell for the magic, he was transfixed by it, and he was reminded how much he wanted to live.

However, relief is once again short-lived and the powers of emotion, like those of reason, are temporary too, a desecrated revelation that will only delay the end. With the foreboding of a gruesome outcome, like a bomb waiting to fall (a foreboding of the author, too, when you think of the terrorist attacks in London 2005), an exhausted Henry reaches his bed at dawn, after a day long as a lifetime, holding his wife in an unconscious re-enacting of the androgyne being, just before the severing.
Posted by Once upon a Reading at 1:30 PM